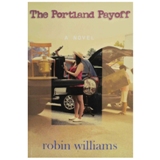 Antiques Are Not Ancient History

When most people think of antiques, they think of their grandma’s ugly puce casserole dishes or that macramé owl hanging in the den. When author Robin Williams thinks of antiques, price wars, deception and high stakes come to mind.

Portland Payoff, the second novel in the series, follows Frank Ball, owner of Regency Antiques in Vancouver, B.C. Joining him on this adventure are Catherine (his trusty sidekick and antiques expert) and Colin (Catherine’s boyfriend and burgeoning art historian).

The story begins in 1944 in the German village of Palenberg, where Allied forces are steadily gaining ground in the late stages of World War II. A young man named Scruggs seeks solace in an abandoned palace where he finds a carved bear statue. It is this statue, so many years later, that Frank Ball finds so fascinating. As his pursuit of this object becomes increasingly frenzied, more mysteries are unraveled. The mystery of the stone bear isn’t the only one in this tale. Frank’s son and Colin are pursuing an antique collection to seek recompense for a 50 year old promise.

Author Robin Williams’ intelligence is evident on every page. It is clear he knows a lot about the world of antiques. It is his passion that makes this story come to life. Never before has the gritty world of antique shows been so accurately described. Every elbow thrown between seniors, every item smoothly stolen from table tops and every sound, smell, and sight are present. For anyone wondering if there really is any danger to collecting antiques, look no further than Portland Payoff.

Williams also has a keen ability to make every character, even the minor ones, feel real. When a pushy man trying to get information about someone’s whereabouts bullies a young woman, the reader can envision the fear on her face and can feel pity for her plight. Williams creates this emotional reaction in the reader with only a few sentences.

The books’ one shortcoming is that there is just too much going on. Either of the two parallel stories would have made an excellent read, but with both occupying the same space, there isn’t enough room for either story to be fully realized. Williams is talented, but with too much happening in the story, his writing seems stifled and that is a shame.

Whether you are in the mood to learn about the seedy underbelly of antique collecting or prepared to read a great story with nearly flawless writing, Portland Payoff will leave you satisfied.