Power of the River 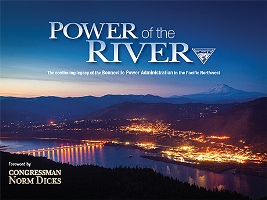 Writing a book about a major organization like the Bonneville Power Administration is an enormous task. An even harder task is making the book attractive, interesting to read, and organized in a meaningful way. However, a small team of excellent writers, designers and photographers fully achieved this goal in Power of the River. Of course, the river in question is the mighty Columbia River, on which the first hydroelectric dam was built in 1937; thus, BPA was born. Over the subsequent 75 years, many similar dams and nuclear power stations were built. Now, the organization is responsible for supplying power to four states.

“…their charge of preserving, protection and enhancing the environment and economic value of the federal hydroelectric and transmission system that grew from great national vision 75 years ago.”

This book is a pleasure to read, even though the topic may suggest boring historical documentation. The text includes many brief quotes by personnel worth quoting over the many years, including the struggle in politics, ups-and-downs in economic settings, environmental problems and various crises. Decades of technological advances in the organization are well documented and several of their crises, such as the blackout in 11 western states during the heat wave of 1996. BPA’s relationship with local tribes, their protection of environment, and their work in renewable energy are parts of this story.