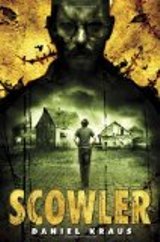 You Can’t Always Escape Your Past

Scowler by Daniel Kraus is a dark Young Adult novel that is not for everyone. The main character, Ry Burke, is living in the shadow of his jailed, abusive father and a horrible series of events from when he was ten years old. Now 19, Ry struggles with his mother and younger sister on the remains of their family farm, while they look with hope toward a new future after the sale of the land. Unfortunately, Martin Burke breaks out of prison and shows up on the very eve of their escape.

“The warm walnut of the shotgun stock touched against his cheek, effortlessly angling him toward the staircase, which fed upward to the confident, lazing bodies of his mother and sister. The muzzle lodged comfortably around a vertebra and prodded.”

Scowler is a wonderfully written story about a boy on the cusp of manhood who is faced once again with his childhood nightmare. This book deals with very serious topics including extreme cases of domestic abuse, childhood trauma, coping mechanisms created by a child’s mind, and how those mechanisms can be recreated later in life. The brutal realism of the writing can make this book difficult to read in places, as you empathize with the victims during their struggle to escape from Martin for a final time. Recommended for older YA readers, and lovers of dark thrillers and horror narratives, Scowler is one crazy roller-coaster ride.