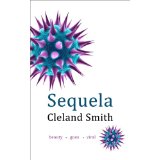 In 2080, fashion has extended far beyond clothes and accessories. The next big thing is viral fashion. Kester Lowe creates intricate STVs that allow the ‘wearers’ to change their bodies into something more unique. Why have a regular eye color when a simple virus can change the color of your eyes to gold? This brings him the attention of Alexis Farrell, a high-powered executive at a fashion corporation called “V.” Lowe chooses to leave his current job for the allure of the highly-funded fashion industry, much to the chagrin of his friends and quasi-girlfriend, Dee.

Sequela is the debut novel from author Cleland Smith. The social commentary mixed with science fiction allow Smith to point out the hyperbolized path society is on. Fashion is valued so highly that people are ready to take on viruses and diseases to alter their appearance. Greed and narcissism are so rampant in the city that sores and welts become signs of success.

As Lowe becomes a star of the fashion world – one of the most desirable people in all of London – he begins racking up enemies. Former friends – those who don’t approve of his genetic mutations and those he betrays – start building into a monster ready to annihilate him. Ultimately, Lowe starts to feel the effects of his choices and begins to regret trading scientific research for financial gain.

Sequela is based on possibilities already present in society – instead of hiding symptoms of a disease, they become badges representing “the good life” of city dwellers. The name Sequela is a scientific term used to describe an after effect of an injury – a brilliant title connected to the disease-ridden society described in the book, but also the social and internal conflicts experienced by the protagonist.

My frustrations with the book stem from its lack of description. While characters and their motivations are developed, it takes time to dig into the plot and understand the setting. I still had many unanswered questions at the end of the book.