The Myth of Persecution: How Early Christians Invented a Story of Martyrdom 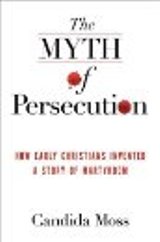 Candida Moss’ new book, The Myth of Persecution is going to raise hackles in the small, exclusive halls of Christian history. Why? Because it attacks one of the foundational tenets of early Christianity: the persecution and martyrdom of early converts to the new religion. Ask any Christian, Protestant, Catholic, and other and the conversation will eventually turn to the persecution of Christians, contemporary and historical, almost always accompanied by a shout out to Nero, and sometimes Diocletian. This piece of historical trivia is always presented as a given and no one ever disputes the “fact” that before the ascension of Constantine to the Imperial crown, Christians were singularly and systematically persecuted by Pagan Rome. Dr. Moss begs to differ.

“What is striking about this myth of a persecuted church in the writings of Eusebius and others is just how polarized it is. With peace the rhetoric grew more polemical, not less. This is the conflict between between truth and error, God and the devil, orthodoxy and heresy. Sides have to be chosen here.”

In this exhaustively researched, yet accessible, book Dr. Moss presents the thesis that this ‘persecution’ of the primitive church is a myth created by later government sanctioned, early Christian sects and used as method to impose orthodoxy, attack sectarian opponents, and bolster their own doctrinal claims. The popularity of martyr stories among the laity only fed the use of the myth and their exaggeration into the grotesque stories we have today, Dr. Moss’ book lays bare that truth and presents us with the opportunity to, instead of retelling myth, begin to explore the actual history of this era.