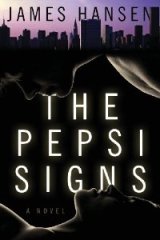 Realities Crash Together in The Pepsi Signs

Michael Pierce and Laura Rodriguez have had a secret love for years, but Michael’s marriage has kept them apart. Then one day they meet in a cafe to discuss a scandal in Laura’s bank. At the same time Michael and his friends are deep in the middle of the biggest real estate deal of their lives. Whathefu has had an accident in Saudi Arabia, and Aubrey, ex-Special Forces, must protect him. Their lives converge one day on a small street in Queens where everything comes undone.

Author James Hansen has crafted a unique and compelling novel in The Pepsi Signs. Based around an overarching plot of scandal and intrigue is an intelligent character study of very human characters. The novel opens with Michael having a vivid dream in which he plays drums with The Beatles. The sequence tells a great story, but more importantly serves to establish Michael as a man unhappy with the way his life has ended up. Each character has a similar story, proving Hansen is a master character crafter. Hansen’s prose is also flawless. Whether dialogue, discussion, or description, Hansen is at his best while writing.

The Pepsi Signs is an exciting novel and rushes along until the last page. It’s also one of the few books that straddles the line between genre and literary fiction, appealing to fans of both. Readers should stop reading this review and get their hands on a copy of The Pepsi Signs immediately.