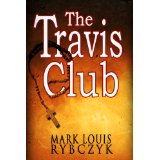 In the beginning of the 20th century the Finck company supplied special cigars to the members of The Travis Club. After the war the club was closed but the Travis Club cigars survived. Taylor Nichols, a handsome young writer, radio host and historical activist, is trying to save the historic Finck Cigar Building that its owner, Noel Black wants to destroy. To prevent demolishing Taylor’s friends chain themselves to a toilet in the restroom of the building. This group is called the Travis Club because each time, after being released from a jail, they give Travis cigars to the police officers.

This is not the last encounter Taylor and Black have with historical artifacts. The mystery surrounding St. Anthony Catholic Retreat that Black has recently purchased from the Catholic Church is another part of this story. The Retreat was designed by once famous architect Randall Hugley. Taylor found Hugley’s drawings in the attic of his rented apartment and wrote a successful book on the man. The anticipated release of Taylor’s new book, Alamo Secret, where he doubts the authenticity of the Davy Crockett tomb in the back of the San Fernando Cathedral, makes various people curious and anxious.

“Taylor… just happened to come across another interesting ‘only in San Antonio’ tale and he just wanted to write about it.”

Thus, Taylor is a little concerned about being invited to a meeting with the bishop’s assistant, Father Olivares. However, Father Olivares is more interested in the Retreat’s drawings and thinks Taylor might have them. There were always rumors about this building but Taylor wasn’t allowed to visit it while writing the book on Hugley’s works. Black is looking for these drawings as well and even burglarizes Taylor’s apartment. Although Hugley was famous for designing hidden places, Taylor wonders why both Black and the Catholic Church are so desperate to find the building’s drawings.

The Travis Club mystery creates a new twist in the history of the legendary Battle of the Alamo. Although it is wonderful to know real details, many readers will agree with the author’s opinion that “history is often not based on fact.”