A Matter of Days 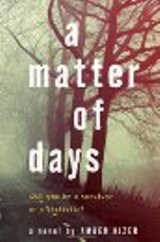 A Matter of Days by Amber Kizer is a YA post-apocalyptic survival story. Sixteen-year-old Nadia and her younger brother Rabbit are left to fend for themselves after the Bluestar pandemic takes their mother. With the majority of humanity dead from the disease, Nadia and Rabbit must cross the country from Seattle to West Virginia in search of their only possible surviving relatives. The two face starvation, bandits, disease, wild animals, and struggle with who to trust in the newly lawless world.

While aspects of A Matter of Days were riveting, such as the descriptions of the devastated cities filled with rotting bodies and tribal-like survivors, the element of danger often seemed remote. Nadia and Rabbit conveniently found ways to get out of trouble before the situation became too dire. Amber Kizer managed to plug in almost every situation commonly found in post-apocalyptic narratives – including roving bandits, broken vehicles, wild animals, dangerous old ladies, and a mall adventure – but this left the story feeling less organic, instead with a point-to-point forced structure. A Matter of Days is a refreshing break in the dystopian genre for readers tired of zombies, but might not offer enough new ideas for longtime dystopian fans.