A Murder on Mardi Gras 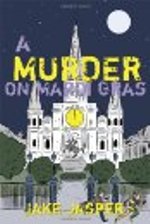 A Jihad on Beads

Jake Jasper is a travel writer. A pretty good one, really. Unfortunately, he is also a drunk. A pretty big one, honestly. When he’s sent on a redemption assignment to write a story about New Orleans and Mardi Gras, he is looking forward to booze, babes and a little bit of adventure. What he stumbles into, however, is murder, mystery and a terror plot with monumental ramifications. In A Murder on Mardi Gras, author Jake Jasper takes his alter ego on a wild ride full of debauchery and chaos — and one serious mystery.

After a series of bizarre interactions, Jake and his contact Marco meet Cotty, a seemingly unhinged man quite a few years their elder, who feels the need to get out of town and then, bizarrely, ends up dead, stabbed in the gut on the festive New Orleans streets. This sets Jake and Marco on the run, and so begins the mystery that is the centerpiece of this novel, a mystery involving the city and a diabolical plot by a group of Islamic extremists.

A Murder on Mardi Gras is overall a strong novel. The story line is fun and the characters are interesting. It does, however, have some weaknesses. Certain elements of the story just aren’t convincing — for example, it makes no sense why Jake and Marco would decide to let Cotty tag along with them in the first place — but by and large, the story is well thought out, well-paced and well done. The Islamic extremist angle is a little played out at this point, and while Jasper does well with his characters, it would have been nice to have villains of a slightly less predictable nature. But you can’t always expect perfection, and this novel certainly delivers on mystery and excitement.