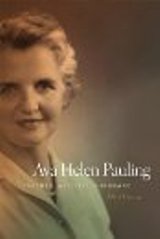 The Woman Beside Linus Pauling

“Already her prominence as Mrs. Pauling made her a desirable speaker, and she addressed the Los Angeles chapter on “World Development” in 1956, her talk touching a theme that foreshadowed her major contribution to WILPF over the next decade: the ways in which peace, prosperity, and social justice were globally intertwined.”

In Ava Helen Pauling: Partner, Activist, Visionary, Mina Carson reveals the depth and breadth of the partner of two-time Nobel Prize winner Linus Pauling. Ava Helen is revealed as a strong, intelligent, principled force. As with most of her contemporaries, she saw her first and foremost duty as being her partnership with Linus; the two of them nearly inseparable from the time of their meeting until her death two and a half weeks before her 78th birthday. Carson’s writing is well-researched and describes Ava Helen in the midst of her personal world as wife and mother as well as in the context of the broader global political environment. Ava Helen is presented without sentimentality as a real human being. Although a slim volume, Ava Helen Pauling is dense with information without overwhelming the reader making it a worthwhile read.