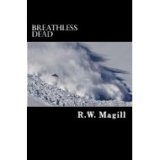 “I always suspected that I would die in a bleak and lonely place like this.” These are the words that begin Richard Magill’s novel Breathless Dead, which tells the story of Johnny, a directionless young man who hasn’t quite figured out what he wants to do with his life—but has clearly gotten himself in some trouble, finding himself injured in the snow, certain that he’s been murdered. Not the best way to go.

Johnny’s life hasn’t been easy—half-Native American son of two alcoholic parents in a small New Mexico town, his mother was killed in a car accident when he was a child and his father, who was behind the wheel, has been punishing himself ever since—and he hasn’t quite gotten the swing of things. Sure, he’s been around, known some interesting—and occasionally dangerous—women, gotten really good at extreme sports, but he just doesn’t know exactly what to do with his life. And since, at the point we’re introduced to him, he believes his life is about to expire, Breathless Dead tells the story, beginning with a broken collarbone that ruined his plans to travel to California with his friends, of just what lead Johnny to the novel’s first lines.

Certain elements of the story are troublesome. Politically slanted bits seem a bit out of place and heavy-handed, and there’s a political correctness in some of the descriptions of people that comes across less genuine than Magill intended. That said, the writing in Breathless Dead is conversational, relaxed and consistent. The plot and Magill’s talent push the story forward relentlessly and keep the audience interested. This isn’t a perfect novel, but it is a well-written, engaging and exciting one. And sometimes that’s just what the doctor ordered.