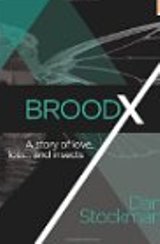 Do not be intimidated by the title of this book. You’ll learn a lot about periodical cicadas (which you’ve probably never heard of) from author Daniel Stockman in Brood X: A Story of Love, Loss…and Insects. His book is a wonderful read. The narrated story is awfully romantic and sad…

Andrew Gardner is 34 years old and divorced. One evening Scarlett King appears at his door with a package of bratwurst and a bag of hotdog buns. She is one of Andy’s neighbors whom he barely knows. She is also divorced and attractive. It isn’t surprising that after a meal and a lot of beer they find themselves in bed together. What surprises them, especially Andy, is the noisy, screaming song of the cicadas they hear. These are periodical cicadas, called Brood X, that emerge once in 17 years. The cicadas’ song reminds Andy of memories from the summer that took place 17 years before.

In the beginning of that summer Andy met and fell in love with Ashley. She and her mother rented a house just around the corner of Andy’s. The cicadas’ song became a symbol of their eternal love. However, Ashley suddenly disappeared before school started and never contacted Andy again. Andy has regretted every moment of his life since then.

Now it appears the same thing is happening. Why has Scarlett appeared in his life about the same way as Ashley did? Will she disappear the same way, too? He is tired of being unhappy and wants a change. Scarlett’s appearance, though unexpected, has brought him hope. He doesn’t want to risk losing his relationship with Scarlett but figures the only way to be healed from his obsession with Ashley is to find her.

Does he succeed? Although there are some clues in the narrative, it is hard to guess how the story ends. Read Brood X by Daniel Stockman to find out.