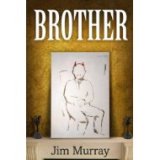 Brothers Explores the Bonds of Family

Brother is a story of revenge. A good one. Author Jim Murray tells the tale of two brothers, Dominic and Spencer, who have been battling each other on some level for their entire lives.

The story opens with Spencer in a strained romantic relationship, looking for work and coping with the deep scars of a traumatic childhood. Things seem to take a turn for the better when he lands a job, but quickly become tense when he realizes his childhood tormentor, Mangan, a violent bully who spent time in the penitentiary after killing a classmate as a teen, holds a powerful position at the same company, but under a new identity.

In the midst of this terrifying realization, Dominic is called to help with a family crisis. His brother Spencer, a recovering alcoholic, drug addict and constant thorn in Dominic’s side, has gone off the grid, MIA from a business trip to Thailand. Dominic begrudgingly agrees to take time off from his new job to retrieve his brother – a trip that, unbeknownst to him, will trigger the unraveling of his world as he knows it and put his entire family in jeopardy.

Murray is a master storyteller. Brothers is a complex, fascinating and fast-paced story filled with well-developed, interesting characters. He skillfully weaves Dominic’s memories of his difficult childhood – from what he saw at Spencer’s unwelcome, family-shattering birth to the mental illness that seems to run in his family – and the events of their current-day lives with a deft hand. He explores tenuous family relationships that have been damaged by lifelong grudges, imagined slights and not-so-hidden resentments – and how they might actually be healed.