Charley Harper’s What’s in the Woods?: A Nature Discovery Book 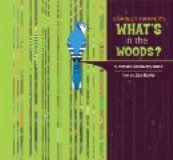 Text and Image Show the Beauty of the Natural World

Since the death of artist Charley Harper in 2007, there has been renewed interest in his modernist paintings of birds and other wildlife. Fans of his artwork have enjoyed vibrant colors, playful settings, and simple yet characteristic representations of the animal world through his books, calendars, notecards, prints and posters. Now, Pomegranate Books has released a series of small books aimed at children in hopes of creating new fans of Harper’s paintings. What’s in the Woods? A Nature Discovery Book combines animals and plants extracted from Harper’s Birducopia with playful rhyming text from children’s author Zoe Burke. Readers are treated to more than twenty illustrations of forest animals. Burke describes their appearance, how they sound, how some of them smell and how they move. The beginning text urges readers to “come along and walk with me” for “there will be so much to see.” A “little Warbler sings” while an owl’s “eyes are round as rings” and on a rock “a salamander crawls” while a snake is “slithering by the falls.” Text and image beautifully merge in What’s in the Woods? and will serve to excite young readers about the natural world.