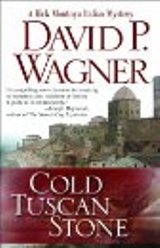 In the Tuscan town of Volterra, while priceless Etruscan burial urns are vanishing, Rick Montoya is enjoying his life in Rome as a translator. He speaks fluent Italian, thanks to his Italian mother, and to attending school in Italy while his father served as a diplomat. A school friend, Beppo, now working for the Italian Art Squad, asks Rick to go undercover to investigate the illegal sale of the artifacts in Volterra. Working with local police, he poses as a buyer for a Santa Fe gallery, and approaches several possible suspects in the area. After Rick has a brief conversation with one gallery employee, the man excuses himself and later is found dead. As the last person known to have seen the victim alive, Rick comes under suspicion.

David P. Wagner is a retired Foreign Service Officer and spent nine years in Milan and Rome during his career. He writes tourist materials about Italy. He earned his BA in English from Michigan State, and served in the Peace Corps in Chile.

Volterra is real town in Tuscany, and the descriptions of the town and area are authentic and tantalizing. The story quickly grabs the interest of the reader and holds it to the unexpected end.