Crow in the Hollow 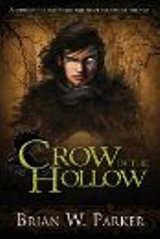 Definitely a Crow to Watch

From a company of slaves bound in a mire of drudgery, a hero is destined to emerge. He is a hero who will not battle with sword alone, but rather with mystical wordweaving abilities which can shatter the very foundations of space and dimensions. He is Suqata, a young man said to be, “Watched by the Crow,” and he is the main character of Brian W. Parker’s debut novel, Crow in the Hollow.

In this reviewer’s opinion, what truly sets a fantastic fantasy novel apart is solid characterization. There are, in general, certain stock character archetypes that have to be employed as elements of the fantasy genre. Luckily, Suqata acts as an excellent interpretation of “The Chosen One” trope. He is amazingly proficient in the use of wordweaving, using songs of primeval origin to manipulate the world around him. He is, however, not arrogant. He is actually quite humble and willing to admit when he makes mistakes, perhaps in part due to his harsh upbringing first as a slave, then as servant to the unrelenting Captain Graye. Throughout his lifelong journey, the reader comes to truly care for Suqata along with some of the novel’s more interesting supporting characters like the aforementioned Captain Graye as well as Suqata’s love interest, the strong-willed and resilient Auralyn.

“Destiny changes, like a story with each new telling.”

Along with being well composed from a characterization standpoint, Crow in the Hollow shines in its world construction. Parker has crafted a unique, yet strangely familiar world that readers will be sure to want to know more about. He also augments his language with some breathtaking illustrations. Further, the plot flows at a near-perfect pace, balancing action-packed events with refreshing moments of quiet character interaction. Crow in the Hollow may not be an earth-shattering, genre-defying epic, but it is still quite the satisfying read and a fine debut for a fine author. It is certainly the best type of debut novel, the type that makes you want to see more from Brian W. Parker.