God Is: A Matter of Fact – The Scientific Theory of Supreme Intelligence 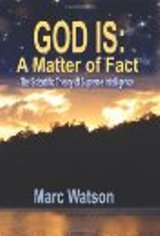 We choose which books we want to review. We choose them because we are interested in what they are going to say, and how they say it. I chose this one because I thought that even though I’m an atheist, I could be fair and evaluate the author’s ideas, his organization and presentation of them. My problem is convincing you that I have tried my level best and was only slightly impressed and not at all persuaded by his effort.

Marc Watson is an engineer by training and practice for the U.S. Navy, Sverdrup Corporation and, finally, Universal Studios. Accordingly, he proposes to use an engineer’s tools: Axioms, theories and postulates. I remember a couple from geometry: Vertical angles are equal and parallel lines never intersect. Unlike the geometric axioms, Mr. Watson’s will not be found outside of this book. Admittedly, he maintains that they are not intended as proof, only to encourage questions and encourage debate as a matter of science.

The debate which ensues, however, is familiar to those who follow the Creationism discussion as making room for the “G-Phenom“, by citing insufficiencies in the scientific community and method. The G-Phenom is that thing, which is not described, that initiated and guided the Big Bang, and the four forces that provide everything from light to the Space-Time Continuum.

It’s been said that physics has become so ephemeral that it’s now impossible to tell when a physicist is joking. That’s where Mr. Watson starts. He will make a statement that is pretty scientifically grounded and then make a giant leap that will leave you shaking your head in wonder. And, with none of them does he suggest experiments that might confirm or refute. Of course, the book is just to stimulate discussion of the undoubted presence of a supreme intelligence that’s behind it all. Of course, if you balk, it’s your deficiency.

In conclusion, words fail me. I can only suggest that you pick up a copy and see for yourself, the outer limits of creation theory.