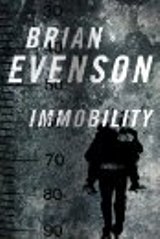 Driven to Find the Truth

Josef Horkai wakes up from a procedure designed to sedate people for a few days, a few months maximum. He learns that he has been “stored” for 30 years. The world is different now. The people he once knew are now dead. Horkai is a paraplegic and he can’t seem to remember how he got that way. Some type of catastrophe called the “kollapse” has destroyed everything he knows (or thinks he knows) to be true. A minute spent exposed to the outside contaminated air equals a year off the end of an already shortened lifespan. For some reason, Horkai is immune to the radiation and can be outside with no risk. It is yet another mystery for which he has no answer.

Now, the group of men who woke him up from storage want to send Horkai to the Granite Mountains on a mission to retrieve a stolen item. He isn’t provided with many details but he is given two “mules” – Qanik and Qalik – men assigned to transport Horkai to his destination knowing full well that this means certain death from prolonged exposure to the elements.

Just as Horkai knows nothing about his past or his mysterious mission, neither do readers. His purpose is gradually revealed over the course of the book, filling readers with tense anticipation. Even Horkai’s few memories and dreams are suspect. Horkai’s desperate need for information about his past is the driving force behind his actions and decisions.

This well written, perfectly edited novel will keep readers guessing until the last page. The story’s twists and turns are suspenseful and numerous. In a post-apocalyptic world, one man must discover his role in humanity’s survival in Brian Evenson’s outstanding book Immobility.