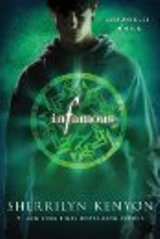 Sherrilyn Kenyon’s Infamous continues the story of Nick Gautier, a fifteen year old boy who has recently found out he is destined to destroy the world. On top of the everyday problems of being poor, and a scholarship kid in a rich school, Nick must also now watch out for the occasional demon attack. Infamous sets the stage as Nick struggles against his genetic gift of dark power and must decide to use his abilities for good or for evil, but when friends can be hidden enemies, who can Nick trust to help guide him?

The third book in the series, Infamous continues to ratchet up the tension as the stakes become higher and Nick’s dark power begins to manifest itself more strongly. It is recommended that readers begin with the first book, as beginning at book three could be extremely confusing. On a technical side, the writing in Infamous can be choppy in places, and it can be difficult to tell who is talking. The story is interesting, but the development feels rushed and extremely condensed. This series ties into Kenyon’s Dark-Hunter paranormal romance series for readers who are interested in that genre as well.