Instructions for a Heatwave 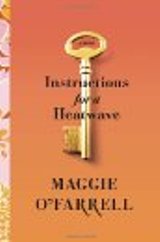 Meet a Family with Flaws but Also Very Human

Maggie O’Farrell presents the reader with an interesting dilemma as she tells the story of a crisis in the Riordan family. London is experiencing a vicious heat wave and one morning, Gretta Riordan’s husband of forty years, Robert, disappears while on his morning task of buying the newspaper. Oh, and he empties out the bank account at the same time. All the children are alerted and descend upon the family home. Michael Francis has a failing marriage; Monica is on her second marriage with two stepdaughters that barely tolerate her and mysterious, wild-child Aoife flies in from New York City. While all three children are focused on finding their father, Greta slowly reveals potential clues which revolve around a hidden past. Simultaneously, each child hides a secret that O’Farrell seductively divulges. In the end, each family member realizes no one is as they seem.

O’Farrell writes with depth and exposes tantalizing details while moving from one character to the next rather quickly. Each deep, dark secret is one that a reader can relate to and very much empathize with the character. There are no “grand” surprises here, but instead, revelations that make each character whole, human  and believable.