Keeping Laughter Alive: The Inspiring Story of One Woman’s Determination to Live a Happy Life Despite the Odds 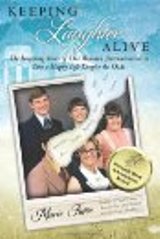 Keeping Laughter Alive is a detailed account of how generational abuse can compound and ricochet through families. It is also a true story of how one woman made it her mission to counter the damage done, even that acted out by her as a passive player in her husband’s violent outbreaks. As a coping mechanism, author Marie Fator normalized the pain she experienced daily, starting as a fetus, when her mother wished her to be a stillborn, to the moment her son, Terry, won America’s Got Talent.

“Immediately after we said ‘I do,’ my fairy tale bubble began to lose air.”

Keeping Laughter Alive is self-published—again, a testament to Fator’s determination to tell her heart-wrenching story as an act of catharsis. Spirituality runs deep in Fator’s narrative. Readers will note that Fator has the ability to clearly recount what the abuse looked like: an impressive feat considering the depth of the denial in her family. The humor in the memoir is darling, displaying the observations and cleverness of a woman to whom family is paramount to everything else. Her writing is clear and descriptive, helpful when trying to keep track of the revolving cast of family and people in Fator’s life, right up to the book’s end where Fator describes in detail her son’s award as the most talented man in America.