Love Letters from a Doughboy: A World War I Love Story 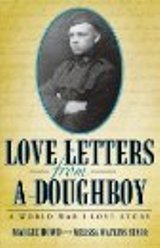 Margie Howd creates a well researched love story between a southern belle and a farmer’s son who is drafted into World War I in her book Love Letters from a Doughboy. She describes what the characters are eating, the dresses worn, cars they drive, songs they hear on the radio, and the gun Thomas Fletcher is given to go to war. Almost exactly half of the book occurs before Thomas is drafted during which the couple meets and decides they are madly in love. The other half contrasts the difference in their experiences after he is drafted. Juliette wakes to birds chirping outside her window as the maid prepares a scrumptious breakfast, whereas Thomas wakes to gun fire and his turn at the latrine.

As romantic as the idea is of a budding author finding her grandparents love letters and making a book of them, the execution of this idea left something to be desired. While much of the lovers’ communication even before he left for the war was through letters that felt truly authentic in their simplicity, they were lacking in romance. The emotions in the scenes were described clinically virtually ruining any tension a reader might feel with the building action. In fact, several parts of this story had missed the potential for a satisfying storytelling, one being a mysterious boyfriend of Juliette’s who seemed to have ulterior motives never explained, the second being the class issue of how Juliette would fair once she lived in a dirt floor house, and the third being how little of the war was actually described. It seemed as if each time Thomas was in the scene, he was being transported or heading out on leave to buy presents for his family. ||Part of the joy of literature is reading and being surprised. In this book, there was a sense of inevitability to the story; the outcome was even prophesied by a cafe proprietor the young man and his father happened upon in Alabama in Chapter Five.