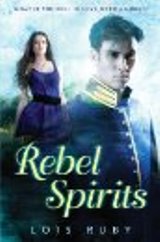 Lois Ruby’s Rebel Spirits is a Young Adult Civil War ghost mystery. Lorelei’s parents have decided to move to Gettysburg and open up a bed and breakfast, uprooting her just before her Senior Year. The first night in their new home, Lorelei discovers that the onetime Civil War hospital is haunted by an attractive teenage Confederate soldier. Nathaniel Pierce believes he was murdered, and needs Lorelei’s help to solve the crime in three days, before he is pulled back to the spirit-world forever.

While the Civil War aspect of Rebel Spirits is an interesting idea, and not something often seen in the YA genre, the book lacks that “something special” to make it stand out of the crowd. Due to the short time duration in which the book takes place, the relationship between Lorelei and Nathaniel comes across as incredibly rushed and unbelievable. Lois Ruby also relies heavily on “lucky coincidence” in order to make sure that Lorelei is able to solve Nathaniel’s decades-old murder before time runs out. With so many fantastic YA reads out there, unless they happen to be a huge fan of Civil War themed novels, Rebel Spirits is one book that most readers can afford to skip.