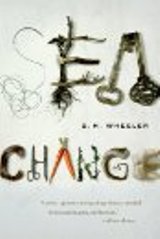 Sea Change by S. M. Wheeler is not a typical coming of age story. Due to a birthmark that covers the left side of her face, Lilly is treated with suspicion by everyone she meets. Unable to be the heir her parents had hoped for, Lilly finds respite in the ocean and in the young Kraken she befriends. When Octavius disappears, Lilly begins a harrowing journey to rescue her friend filled with deception, danger, and a tangled web of obligation and favors.

“Did I make this choice when I spoke to this creature, or did I already make it when I walked into this wood, or even before, when I promised my kraken his freedom?”

Sea Change is full of fairy tale elements, from the beautiful to the horrific. Some of the topics broached during Lilly’s journey are thought provoking, shockingly honest, and disturbing. This is not a happily ever after type fairy tale. Lilly’s journey is fraught with death and heartache, mirroring the fact that growing up is often a battle, and a learning experience. This isn’t a book to hand off to younger teen-aged readers as much of the deeper impact of the narrative may go over their heads. While not for everyone, Sea Change is a powerful debut work.