See Now Then: A Novel 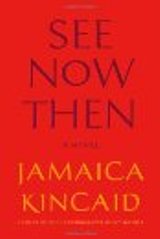 A marriage falls apart through the eyes of the husband and wife in this short novel. Both partners wander over the past and present in their remembrances of their steps toward an unraveling of vows. Emotions are revealed, lies are told and often the uncomfortable truths explained. This is not an easy novel to read for many reasons. First, the title indicates the nonlinear fashion of the tale. Readers must pay close attention as characters jump back and forth in time, often within the same sentence. Thoughts and feelings are repeated. Sentences drag on with Mr. and Mrs. Sweet’s streams of thought, resulting in only two or three sentences per page. Secondly, the characters are largely unlikable. Mr. Sweet states often how much he hates his wife, who arrived on a banana boat. Don’t look for a redeeming character in Mrs. Sweet either. Both parents use their children in their battle against one another. Each takes a child on as their favorite – Mrs. Sweet bonds with her son, Mr. Sweet steals away the daughter. Their children are beautiful and perfect, shown in the names Heracles and Persephone, and they are bound to take sides in this fight. Lastly, this reader found the novel to be a discouraging look at marriage and parenting. There is no happy ending, just lives unraveling over a jumble of time.