The End, My Friend: Prelude to the Apocalypse

“The date palms are fireballs. Fire engulfs the Palm Springs Hilton and explosions rock the hotel.” 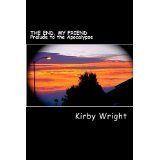 This post-apocalyptic novel by Kirby Wright follows the journey of an ordinary man and his wife at ground zero as, in the narrator’s words, “all hell broke loose.”

Tony and his wife, former Vegas showgirl Evo, have just discovered they are pregnant with their first child. Movie stars are dead, their estates ransacked and burned. Tony and Evo’s southern California dream predictably degenerates, with a proliferation of motorcycle gangs, religious fanatics, and teenagers with automatic weapons. Tony and Evo take off with their cancer-ridden Russian Blue cat in tow and encounter various friends and foes as they seek safer pastures.

The End, My Friend contains good narration; Tony has a distinct narrative voice. The banter between him and Evo is realistic and fun, and the dialogue in general is strong between characters. But as far as the book as a whole, it was too easy to get stuck on the vague and faintly realistic details — like Evo’s seemingly symptomless pregnancy and her lack of anxiety over giving birth in a country wracked by violence, not to mention the implausibly rapid degeneration of society on a global scale and the confusing and contradictory timeline — and even easier to lose the ability to effortlessly appreciate the story. The characters’ lack of urgency in getting to a safe haven with the pending birth of their child detracts from the story’s tension, as they make detours and stop to bury their cat or give several rations of water to a thirsty llama, which when considered against the context of societal decline and the supposed dangers from other people, seems not only frivolous but ignorant. And while Evo’s striking the spontaneous yoga pose is cute at first, it gets old quickly and seems to have no bearing whatsoever on what is going on around her. While this might be a reflection of her character being free-spirited and endearing, if a person struck a yoga pose in random situations, you wouldn’t think they were hot but rather insane.

More than that, there are some major flaws in the details that erode the reader’s suspension of belief. For instance, the Eifel Tower cannot be torched, as the narrator reports. Likewise, it does not seem probable that an army consisting of ex-cons and derelicts would be able to overtake a city the size of LA without massive tactical support. Also, the fail of media on a global scale, relatively simultaneously, seems a naive portrayal of degeneration.

While this is a fantastic idea, the experience of an ordinary man on the ground during a global collapse, this creative exercise in worldwide panic could have used further development and deeper exploration of the worldwide reaction as well as a more realistic depiction of the human reaction.