The Girl Who Loved Camellias: The Life and Legend of Marie Duplessis 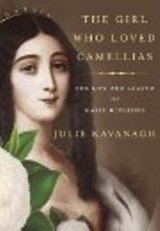 The Model for Many Tragic Heroines

Julie Kavanagh’s The Girl Who Loved Camellias presents the nearly forgotten life of Marie Duplessis, an astoundingly beautiful and successful Parisian courtesan. Duplessis was the model for several works of art, including, most famously, Verdi’s “La Traviata” and Dumas fils’ “The Lady of Camellias”. Kavanagh, a former dancer and writer on the arts is immersed in the world that celebrated Duplessis, and this familiarity shows in the text. Readers who are unfamiliar with La Traviata, in particular, would benefit from reading a quick overview of the opera, or keeping a cast of characters at hand as they read. The biographical aspects of the text have obviously been painstakingly reconstructed, and Kavanagh has worked hard to recreate the world of a woman who was a splendid ornament to the highest levels of society who burned brightly but briefly. Duplessis was born to a poor country family, so there is little record of her earliest life other than rumor, which still hangs on 200 years later. She came to Paris to work as a shop girl, and like many other working girls skirted the line between prostitution and innocent fun, until she catches the attention of wealthy patrons who elevate her to the highest levels of society.

Kavanagh does a good job of reconstructing what can be known about such a life and imagining what cannot be definitively known, in a way that evokes a life without becoming historical fiction. Fans of the Lady of Camellias are strongly encouraged to pick up this book.