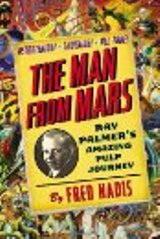 The Man From Mars was actually one of many, but Ray Palmer (1910-1977), magazine publisher extraordinaire was among us, and changed our world also. His story is told by Fred Nadis who has documented his life. Palmer was not the most famous magazine editor, being overshadowed by the likes of Hugo Gernsback and John Campbell, but he achieved a great deal in his career.

“His loyal readers embarked on an endless mystery tour careening between the real wold and the pulp wilds.  He offered unorthodox ideas to shake things up, overturn preconceptions, and create mystique.”

Early in life he was hit by a car, the accident breaking his back and making him a cripple and hunchback from an early age. This and his interest in genre literature made him an outsider. His tale is rendered beautifully here. His accomplishments include starting the first fanzine, generating the mystery around UFOs, promoting leftist politics, and running Amazing Tales and many other magazines. One finds here a fascinating documentation of one of the interesting chapters in science fiction, the promotion of the pulps, and in Palmer’s case the alternative science magazine.

Nadis has succeeded in the telling of a not widely known history, and part of the problem with the book is that the reader would have liked to have found out more stories about some of the more famous people. Those stories though have been told elsewhere.