The Sol of Jupiter 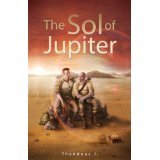 The word “sol” can be interpreted differently. “Sun” is one meaning. However, if you think that The Sol of Jupiter by Thaddeus J is about our Sun or the biggest planet in our solar system, you’d be wrong. Jupiter is the name of a small town in Florida where Turner Michaels, the main character of this book, resides. He is fairly unique and almost a star. At twenty years old, Turner is smart, intelligent and a patriot. After 9/11, believing that he could and should give something to the country, Michaels joins the United States Marine Corps. Why the Marine Corps? He simply likes Dress Blue (just kidding, but who doesn’t?). He is a perfectionist. Michaels works hard to achieve the best results in his military training. His efforts are awarded by the Navy and Marine Corps Achievement Medal.

When he is relocated to a training camp in the middle of the Mojave Desert he meets his old friend Jace Sozio who has recently returned from Iraq. As they rekindle their friendship, a mutual attraction grows. Though Michaels is confident with his sexual orientation, Sozio isn’t ready to admit it, even to himself, and they both keep their feelings secret. When they eventually reveal their true feelings to each other they don’t really know how to deal with the situation. Both men are afraid to lose their friendship and their military career. Their deployment is threatened. They are afraid of other people’s reaction as well. While other characters, like Michaels’ friend, are supportive, Sozio’s Iraqi friend and roommate treat Michaels like the enemy. Do Michaels and Sozio have to end their relationship or keep it secret forever?

Tough language, salty jokes, taunts, four letter words, stubbornness, fears, fights, concerns, frustration – you’ll find all these here. However this story is about trust, friendship and true love. Although this book doesn’t have any female characters, the plot is solid and can be read with interest by people of any gender.