“War is about the people who fight it. When they fight together with the same belief, they form a single entity. That’s why heroes are never singular events; they are always followed, repeated, exceeded. I have hope because once the fire has started, it’ll stop at nothing until it takes over. I need to say no more. The game is on. We’ve made our choice. Everyone’s effort will count, every hope will open a possibility, and every pain we’ve suffered…will add to our strength.” 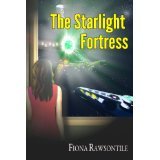 In The Starlight Fortress, young Queen Geneva of the Alliance battles it out with the Imperial Forces while navigating through a life filled with the various suitors and pregnancies. The story opens in the middle of a conflict between the two forces. which represent the forces of good, The Alliance, or democracy, represents the forces of good and the Empires represents the evil totalitarian state. Geneva, although a queen, has limited power–her state is more a republic than monarchy. The backstory emerges gradually. Geneva and her allies and enemies are descendants of humans who destroyed the Earth, scattered throughout the universe and have been engaged in various battles since. Geneva leads the “good guys” and the mysterious Pompeii the “bad guys,” or the Empire. In addition to the various aggravations that the tirelessly diplomatic and compulsive eater Geneva has to deal with is “A Second Chance,” an environmental group intent on limiting the RA’s abilities to destroy another planet or planets. Geneva remains a skilled and brave soldier throughout, working with the various forces to broker peace.

The novel is well-written. The author has a skillful style and knows how to build scenes and conflicts. Her characters are also three-dimensional, not cartoons representing good and evil. The plot, although well-worn, takes on some variation in its conflicts, and a powerful statement about peace is made. However, one area of concern is how busy and complicated the plot becomes. It is very hard to keep track of all of the characters, their interests and cultures and the conflicts involved. I was well into the first quarter of the novel before sorting out the major RA-Empire conflict. This may be endemic to the genre, however when a reader opens a fantasy novel, she enters a new culture that she must acclimate to–even though its inhabitants also go on shopping trips and celebrate Christmas.