The Why of Things: A Novel 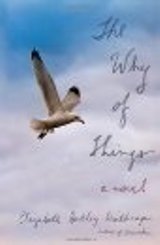 Elizabeth Hartley Winthrop’s book The Why of Things will take you by surprise. Winthrop is a masterful storyteller with writing skills, attention to detail, and an intriguing storyline.

Joan and Anders Jacobs arrive with their two daughters at their Massachusetts summer home to find a truck in their quarry. The driver, James Favazza, has apparently committed suicide. This event opens the family’s raw wounds from their own, Sophie, the 17 year old daughter’s suicide just a year earlier. Evie, the 15 year old daughter investigates the crash site and collects “evidence” convinced that foul play has happened. Joan stalks the funeral and the home of Favazza’s mother. Anders cannot stop thinking about his dead daughter and Eloise, the youngest daughter, keeps bringing dead animals home to bury.

“It was many years ago, but the question I still struggle with is the “why”.  For the living, for those left behind, there is no answer that is good enough.”

Winthrop discloses the past details of Sophie’s suicide molasses-slow so that this reviewer was trying to piece together how the current tragedy for the Jacobs family connected to the painful death of their daughter. Winthrop was so skillful in how she weaved the two stories together. In the end, each family member has figured out how they need to heal and readers will imagine that if faced with similar events, this story offers insight, entertainment and a satisfying end.