Yoko Ono: Half A Wind Show: A Retrospective 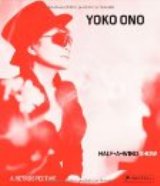 The Amazing Creativity of Yoko Ono

“Yoko Ono’s art has always moved between categories. She has worked with literature and music and created works concerned with the theme of painting. Some of her ideas have been realized in sculptural form or in installations, others in the medium of film.”

To some people, Yoko Ono’s primary claim to fame was being married to John Lennon and the inspiration for his song Woman. In Yoko Ono: Half a Wind Show: A Retrospective, her work as an artist in a variety of media over the course of five decades simply shines. It discusses her influences starting with her upbringing in Japan in the era of the Second World War, with both classical Japanese and classical Western training, under the slogan of Wakon-yōsai or “Japanese spirit, Western technology”.  The retrospective exhibition in this book reveals the diversity of her background and her creativity. The text is well written and interspersed with images from her works. The final section is filled with her own writings. It is an art book worth reading as well as viewing.