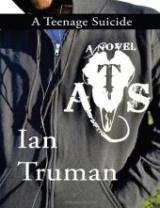 Teenage Suicide, Don’t Do It

Connor is a jock — but no, he isn’t a jock. He’s a hardcore kid. But he’s still kind of a jock. He is just plain ol’ depressed. About to graduate high school, trying to figure out where he fits in between the preps and his hardcore friends, he’s just lost. And he’s mad. About everything. For no reason. And apparently he’s suicidal too. Because, you see, he lives in the suburbs and it isn’t REAL enough for him. He wants to live in the city and have MORE. Because his life is hard. Because he has ANGST. Because he is from the suburbs and his parents expect him to make something of himself. But maybe he just wants to drink and go to punk shows and read PETA literature. Parents are such a drag, man. ADULTS DON’T UNDERSTAND ANYTHING, MAN. MAYBE CONNOR JUST WANTS TO FIND HIS OWN WAY, MAN. STOP PRESSURING HIM, OKAY?!?

Such is the basic outline of Ian Truman’s novel A Teenage Suicide. Whiny punk kids complaining and feel hopeless because their lives aren’t really that hard, but they think that they’re seriously suffering and are in these convoluted nihilistic existential crises. Or, more succinctly: there are those who relate to Holden Caulfield and there are those who think The Catcher in the Rye is a boring, overrated book. If you’re the former, A Teenage Suicide might be the book for you.

A common problem with self-published novels is that the author has a vision for what he or she thinks will make THE MOST AWESOME book, a vision of what he or she wants to convey, and grand, cinematic scenes that speak to him or her — and that they, in turn, think will speak to the audience. What they don’t have, however, is editors or people who are able to tell them plainly that an idea doesn’t work, that certain dialogue isn’t necessary, that the characters aren’t fully fleshed out, and that as a result their trials and tribulations don’t really matter to the audience. A Teenage Suicide is no different. While you can tell Truman is trying to make a point with the novel, he would be best served by hiring an editor to trim out the unnecessary minutia that permeates the book and make his characters seem a little less self-indulgent, whiny, and one-dimensional.

I mean, as a reader I should care if the protagonist of your novel is going to kill himself, right? By the end of this book, I didn’t. It just didn’t matter.