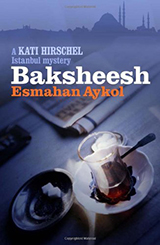 Kati Hirschel needs a new flat, which requires baksheesh, or a bribe. With the help of a paid-off government official, Hirschel finds a gorgeous apartment. When the tenant is found dead within it, Hirschel is a prime suspect. This amateur detective goes to work investigating the crime and clearing her name. Her exploits lead her across the city of Istanbul, into the luxurious neighborhoods of the victim’s mistress, down crime-ridden streets, and into numerous cafes and tearooms. Those familiar with the Turkish city and culture may find the location references of interest. For this reader, the unfamiliar geographic references and tangential insights into Turkish behaviors slowed the story down.

Author Esmahan Aykol uses brisk dialogue to move along the murder investigation, but unfortunately distracts the reader with too many suppositions by the main character, leading to inconsistent pacing. For instance, following a tense phone call with her ex-beau, Hirschel comments on her physical appearance, which was not mentioned in an earlier conversation. “My weight changes constantly, depending on my psychological state. I felt like a sprinter trying to run with tightly bound ankles. I wasn’t even a sporty type, so I could barely move my feet.” Later, while questioning a verbose man of interest, Hirschel asks, “can we get back to the business of land allocations?” and I found myself asking a similar question of Aykol. Could you get back to the main storyline? Yet the storyline also lacks tension. When Hirschel is cleared as a suspect almost immediately after being declared one, the stakes are lowered. Without knowing the murder victim as anything other than a rumored sleazy businessman, the reader has little interest in finding the culprit.