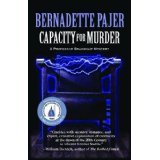 A Good Old-fashioned Whodunit on the Pacific Northwest Coast

On the Washington seashore, in the early 1900’s, a health spa called Healing Sands offers the latest health treatments. In those adventurous days, people were still enthralled with the many new discoveries of science. Professor Benjamin Bradshaw at the University of Washington was highly regarded as an electrical forensic investigator. He was urgently called to Healing Sands to investigate the death of a man from an electric medical device. Upon arrival, he is thrust into a puzzling investigation with several suspects and little evidence.

Bernadette Pajer is the author of the Professor Bradshaw Mystery series which include A Spark of Death, Fatal Induction, and now Capacity for Murder.

Mystery, missing gold, romance, quirky characters, surprising twists; this book has it all.