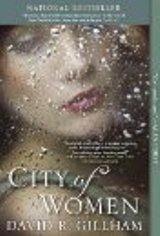 David Gillham’s City of Women is the story of Sigrid Schröder, a German soldier’s wife in Berlin, during 1943. On one hand, Sigrid is a model German woman, hardworking and frugal; on the other hand, she is finding it more and more difficult to turn a blind eye to the cruel injustices of the regime. Things get more complicated after an affair with a Jewish man, and discovering a network of people struggling to help Jews and other oppressed minorities escape the country. When one can be executed just by listening to the wrong radio station, Sigrid must make a difficult choice.

City of Women is a very believable period piece and a fascinating inside look at life inside a Nazi ruled Germany from the perspective of an ordinary housewife. Not only are the minor aspects of day-to-day life are detailed, from the difficulties of shopping with ration cards to the struggle Sigrid has with her mother-in-law, but so is the more sinister side of the regime, as the disappearances of anyone speaking against the regime mount. It is easy to get caught up in Sigrid’s story, and the dangers that surround her on every side.