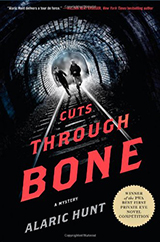 In Manhattan, Clayton Guthrie, a long-time private detective, is hired to investigate the homicide of a beautiful female student from Columbia University. The man in jail for the murder, Greg Olsen, is believed by his friends to be innocent but the police think they have solved the case. The police also suspect that the murder may be tied to a serial killer who has been killing young women. Guthrie’s investigation quickly becomes complex with many possible suspects and motives. Then people associated with the case are killed. Guthrie and his tough young assistant, Rachel Vasquez, are attacked in their office by thugs intent upon killing them. With his contacts in the police department and FBI, Guthrie digs into the background of Olsen and uncovers yet another dangerous suspect.

This is the first novel by author Alaric Hunt. He is in prison in South Carolina, serving a life sentence. In the prison library he found a listing for a Private Eye Writers of America competition. He entered the following year and won. Cuts Through Bone was written in two longhand drafts and then typed out on a typewriter.

Edgy and street savvy, this crime fiction draws you into the seamy side of life in New York City. Engrossing and entertaining, the characters come to life on the pages.