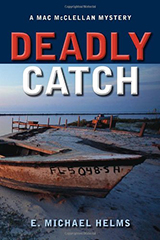 Now retired Marine Mac McClellan, returning from the war, decides to take some time off for fishing, and heads for the Florida Gulf coast. While out in a rented boat, fishing along some grass flats, his lure snags a body. Later a bag of rare marijuana was found in his rental boat. With someone trying to frame him for murder, he begins his own investigation with the help of a local woman and the sheriff. Adding to his troubles, someone burns down his motor home, and he receives threats to back off his investigation. More deaths and signs of drug smuggling increase the intensity.

Author E. Michael Helms’s memoir of his Vietnam combat service, The Proud Bastards, has remained in print for two decades and has sold nearly 50,000 copies. Helms is also the author of Of Blood and Brothers, a two-part novel about the Civil War. Deadly Catch is one of the better of several recent books about a returning war veteran being wrongly accused of crimes. This one gifts the reader with quirky characters and an intriguing plot.