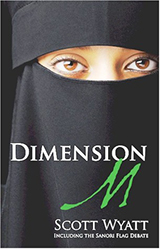 When Fatimah Ibrahim and Alden Frost break into Public School 32 in Uzbekistan to hang a flag symbolizing human unity, they have no way of knowing that they are stumbling into an international conspiracy, for as it turns out, Public School 32 is more than just a Soviet-style schoolhouse. It is also a repository for the Sahin Diary, a document purportedly containing dramatic, graphic accounts of the Armenian genocide which is kept under lock and key by the Turkish government. Other people, however, are aware of this, and Ibrahim, famous beauty and heiress, and Frost find themselves imprisoned with very little idea why.

So begins Scott Wyatt’s rollicking novel Dimension M, a well-written thriller with a literate international edge. There’s no posturing in this novel, no quasi-Da Vinci Code ambitions. What is presented is an intelligent, multi-faceted story with relatively realistic characters and a bit of a heart. Sure, as per typical thriller conventions, the female characters are portrayed as unrealistically attractive (not every woman is beautiful, authors) and vulnerable to the incomparable male pheromone scent, but overall, the novel is an entertaining read filled with twists, turns and surprises that keep the audience entertained and wanting to read just one more chapter.

And if keeping the audience involved for just one more chapter isn’t the sign of a good thriller, I don’t know what is.