“Peter gulped. He was most definitely not ready. But he said okay, and before he could talk himself out of it, slid his legs over the side like he was slipping into a swimming pool.” 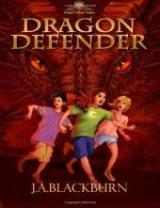 Dragon Defender is an exciting, young adult novel that is similar to the books in the Harry Potter series in that it is able to hold the attention of adults as well as the younger, middle school audience for which it is written. It is the story of orphaned Peter who lives with his grandmother in California. Peter’s mother mysteriously disappeared when he was five, so when a man shows up at their door, he eschews his grandmother’s advice to beware of strangers and lets the man inside.

One of the deft skills of author J.A. Blackburn is that she is an expert in creating suspense. In this archetypical hero’s quest, readers are regaled with the fictional journey of a boy suddenly faced with a choice to become involved in dangerous deeds and become far braver than he ever imagined he could be in his tech-y dreams. Peter travels through the wild jungles and eco-tourist traps of Mexico where he meets local villains, a bored rockstar’s daughter and modern day witch doctors. The prose is vivid and entertaining with just enough fifty-cent vocabulary words to engage young people’s mind. Readers will appreciate the way Blackburn brings the text to life and pulls readers through fast paced action scenes.

Dragon Defender is a confident first novel that offers thrills on every page. The plot is solid with only a few occasions where minor questions are raised and left unanswered. The positive moral messages that create the foundation of the book include the importance of building friendships, cultural sensitivity, familial ties and duty and honor. This book is the first in the Dragon Defense League series and readers will anxiously await the next installment.