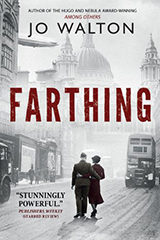 A Whodunit in an Alternate England

Jo Walton’s Farthing takes place in a world of alternate history. In this world, the Second World War ends not with Hitler’s defeat, but with the English negotiating a “live and let live” peace with Hitler. Lucy Kahn, formerly a scion of the English aristocracy, but now hanging on the fringes because of her marriage to a Jewish banker, and her husband, come down for a weekend party at Lucy’s parent’s house. While they are there, a politician and architect of peace with Hitler is murdered, in such a way that Lucy’s husband is immediately thrown under suspicion.

The story is told from two points of view; Lucy’s and the police detective who comes to investigate the case. This dual narration lets the reader see the different points of view, while still maintaining the individual viewpoint of each character, and it helps the reader see a number of different reactions to the political events that have been taking place. The whodunit aspect of the story is tightly crafted, and will keep readers involved, and on the edge of their seats. The novel may strike some as slightly pedantic in its message, but the allure of the story helps smooth out any rough edges.