Live Long the King: A Novel 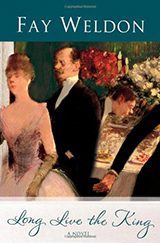 A Less Than Enthralling Read

Long Live the King, the second book in Fay Weldon’s trilogy, returns the reader to the Dilberne family at the turn of the 20th century in England. Lady Isobel faces menopause, while Lord Robert plays with fire in the form of another man’s young, American wife. In the meantime, their daughter Rosina remains unmarried because she is too tall and intelligent, while her new sister-in-law, Minnie, bears the burden of producing an heir. The Baums, with whom Lord Robert does business, continue to try to find a place in a society that does not welcome Jews. Finally, Weldon introduces Adela, a 16-year-old niece whose story takes a bizarre turn. All of this occurs in the shadow of the impending coronation of King Edward and Queen Alexandra.

While this trilogy has a certain appeal because it is reminiscent of Downton Abbey, this volume is unsatisfactory. The story lines feel dashed off; therefore it fails to hold any real interest. Adela’s storyline seems particularly far-fetched. Furthermore, Weldon includes an unnecessary number of vague references to sexual acts that cannot be discussed. Long Live the King can safely be missed.