Love Me Anyway: A Novel 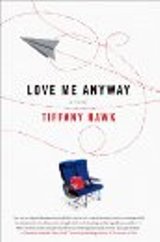 Flying And Love are Difficult

Love Me Anyway by Tiffany Hawk, a former flight attendant, gives the reader a glimpse of life working in the sky. Emily leaves her abusive marriage to become a flight attendant for United. She envisions her new-found freedom as a way to leave small-town Bakersfield behind, as well as, her nagging father that constantly tells her to “take the safe way through life” even though it might not be as satisfying. Emily’s roommate, KC, also joins United to escape from her dying mother in Las Vegas.  KC cannot forgive her father’s desertion and his obvious lack of interest in her life.  Both Emily and KC believe that traveling the world will make them forget what they are running away from, but instead, they find new entanglements. Instead of freedom, both really want stability and a settled family life.

Take Me Away engaged this reviewer by offering hints of airline life.  Passengers often believe flight attendants lead a glamorous life, but Hawk dispels that myth quickly. Hawk created two quirky characters that run away, screw up but ultimately find what they are looking for – even if it is not perfect. This is a thoroughly enjoyable read and one that will never allow you to look at flying the same way again.