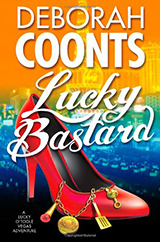 In Lucky Bastard by Deborah Coonts, we follow Lucky O’Toole, vice president of customer relations of her father’s casino, The Babylon, on an adventure through her native Las Vegas as she solves the crime of who killed the woman found on the hood of a Ferrari at the casino dealership with a one-of-a-kind Jimmy Choo stiletto in her neck. Solving the crime, Lucky is taken further into the world she already inhabits of illegal poker and its shifting loyalties and over-the-top personalities. She also maintains the usual craziness of her personal life, including her mother, former whorehouse owner, and her father, current casino owner, now respectfully married to each other and her mother who is very pregnant. Finally, while immersed in a turbulent relationship with her current boyfriend, Chef Jean-Charles, she fends off her still-smitten song-writer ex-boyfriend.

“The whole thing was a mess – Dane on the lam, presumably with Cole Weston in tow, although the blood confused things, Dane’s wife dead, our poker room manger poisoned like a bit player in a Bogart black-and-white, Shady Slim taking a dump (no, I did not grin at that pun), Slurry fighting for his life, Watalsky and DeLuca lying by omission, a mysterious girl on the run, a killer on the loose…and poker the only connection. Oh, how I hated poker…and all the other games people played.”

I reviewed a previous Lucky O’Toole mystery, So Damn Lucky, and am really impressed by the development in craftsmanship displayed: the plotting, too busy in So Damn Lucky, is vastly improved in focus in Lucky Bastard. Most remarkably, character Lucky O’Toole has really come into her own, her narrative voice tough without real cynicism.  Deborah Coonts’s Lucky O’Toole has taken her place next to Sarah Paretsky’s V.I. Washarski and Sue Grafton’s Kinsey Milhone in the growing legion of strong female detectives.