Mister Rainbow in the Death of a Ladies’ Man 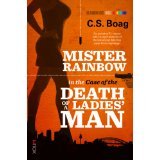 This is the second book in the Mister Rainbow series so some readers may already be familiar with him. For those who aren’t, he is also known as Mr. Smith and he always wears a fedora and knows Latin. He lives on a boat in Sydney Harbor. He doesn’t remember the exact age of his daughter but he is determined to keep her and his ex-wife safe and even goes to his daughter’s ballet lessons. He doesn’t carry any identification and it isn’t clear if he has a private detective license. It seems that he is afraid of crossing paths with police and other officials more than with criminals. While telling his story, Rainbow calls himself (and all other male characters) a joker. All female characters are dames.

One day Mr. Rainbow gets a call from a dame. Annabel Franklin once saved Rainbow’s life and tells him that somebody wants to kill her boyfriend, Thomas Tycho. Rainbow hurries to help, but it is too late. He comes upon a beheaded body that is identified as Tycho by an unusual tattoo in Latin around the neck. Less than half an hour later Rainbow also finds Annabel dead in her apartment. Although Tycho was a trickster and everybody’s enemy, Rainbow feels that he has to find the killer to pay his debt to Annabel.

While looking around Annabel’s apartment, Rainbow finds a list of names on her computer. All the criminals mentioned could be Tycho’s killer. Rainbow pays some unpleasant visits to Sydney’s underworld tycoons only to find out that none of them is responsible for Tycho’s death. Eventually, it is his knowledge of Latin that helps Rainbow crack this case. Although it is a little hard to fully enjoy this book without the knowledge of British-Australian slang (you can Google it), it is fun to follow Rainbow’s exploration.