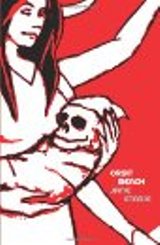 Enter This Beach at Your Own Risk

Jane Etarie’s Orbit Beach is an interesting specimen to say the least. It’s about a tormented young woman working a dead-end job, living a dirty life. In a way, it’s about motherhood. It’s about relationships, platonic and romantic. It’s about many things, but is it worthwhile read?

When picking up this novel, readers will instantly notice that it utilizes a great deal of mature language. Now, anyone who has read the work of authors like Chuck Palahniuk understands that there is indeed a way to take diction some may consider crass or vulgar and elevate it into something honest and elegant. Orbit Beach, unfortunately, does not succeed in doing this. Not only does the narrator’s language come off as obscenely immature, but after about the twentieth time she calls someone a “retard,” it also appears trite and repetitive.

On that note, the narrator is perhaps the most infuriating character this reviewer has encountered in recent memory. Imagine Holden Caulfield being about ten times more whiney and a hundred times more violent and unpredictable. That’s this novel’s protagonist. She fakes pregnancy to keep her boyfriend from breaking up with her, then gets pregnant by sleeping around with dozens of other men. She constantly smokes and drinks while with child, yet she brags about what a great mother she will make. If such hypocrisy was not horrible enough, she also nastily takes advantage of her coworkers’ kindness while annoyingly proselytizing for the latest self-help fads.

Furthermore, she engages several times in violent temper tantrums that result in those around her incurring serious physical injury. The narrator is clearly a character who has suffered a great deal of trauma and abuse throughout her life, but after seeing her make so many wretched decisions, it’s hard for the audience to retain any sympathy for her.

That all being said, this novel is certainly not the worst this reviewer has ever read. In fact, there is one chapter that relates an anecdote about a hippopotamus and a vial of insulin which is actually quite darkly comedic. If the author had isolated and developed this chapter’s wit throughout the rest of the book, it would have most likely been much more successful. However, in its present form, Orbit Beach will simply not appeal to most readers.