Paideia and Cult: Christian Initiation in Theodore of Mopsuestia 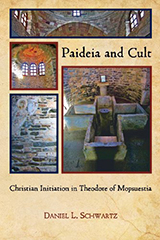 Early converts to Christianity had to be taught from the beginning what it meant to be a Christian, the rites involved, and a new way to learn about the world. While it might seem commonplace today and something that is widely known; learning to be a Christian was a big deal in the ancient world, and how they were taught was important as well. This work examines Theodore of Mopsuestia and how he taught new converts to Christianity. First we explore the world of the early Christian in the Near East. A world of a fast changing society, and a religious identity that was always in flux. Where different interpretations were constantly evolving, the role of bishop was highly important.

We get to start from the beginning to the end with this work, from how a new convert first came into the church to how the sermons were ordered and the topics that were covered. Each topic was covered a certain way to educate new people into the ways of the Church. This book does have a few flaws though It spends too much time setting the groundwork before further exploring the actual sermons. Also, the author spends quite a bit of time on Theodore and his eventual label as a heretic.