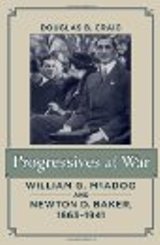 Two Men at the Turn of the Century

I am not a big fan of double biographies; one book that covers the life of two different people. It rarely works and it feels like the author could not decide who he would have liked to focus on. That is why I read with some trepidation this work from Douglas Craig about two main players in President Wilson’s cabinet. While they both came from different parts of the American South, both of them lived very different lives, had different experiences, and approach the world in different ways. Each deserved a biography in their own right; combining them together short changes them both. Also, the jumping by theme and chronological order does not help as well.

These two men came of age during a period of change, and transition in the United States. The Civil War was just coming to a close, and the rise of the new south was starting. Also the rise of the Progressive movement was spreading across the nation, and these two fall into the Progressive camp. After serving with President Wilson they went their separate ways. But time passed them by.