Six Women of Salem: The Untold Story of the Accused and Their Accusers in the Salem Witch Trials 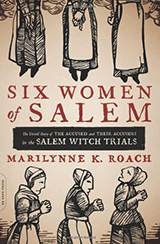 The Salem witch trials consumed over twenty communities in 1962, dragged at least 162 people before the law, tried 52, condemned 30, and put 20 to death: 19 by hanging and 1 by pressing to induce a proper plea. At least 5 more died in prison. Thus begins Marilynne K. Roach’s Six Women of Salem: The Untold Story of the Accused and Their Accusers in the Salem Witch Trials.

“The memory of the actual people involved in the original tragedy of 1692 can become lost, replaced by stereotypes, or disregarded. They deserve to be acknowledged.”

Roach begins with the back-stories of six women, both accusers and accused sympathetically written: sharp-tongued Bridget Bishop, well-educated Mary English, beloved matriarch Rebecca Nurse, bereaved mother Ann Putnam, slave Tituba and maid Mary Warren. Then, Roach goes into exhausting details from the first accusation through the trials. There’s a sense that Roach uses every remaining scrap of historical detail that can be uncovered, even using abstract facts in italicized fictionalized parts, maps of neighborhoods and photos of where buildings stood. Finally, the aftermath is summarized. This is a book for anyone who wants to sit in the courtroom of 1962 during the witch trials.