Straight Lines: A Story of Illness, Addiction and Redemption 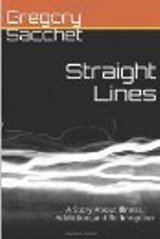 When all of your friends and even your boss are coke addicts or dealers, it is time to get a new group of friends and maybe even a new job. This lesson and others are just a few that jump off the pages of Gregory Sacchet’s Straight Lines: A Story of Illness, Addiction and Redemption. His story starts when he was diagnosed with Tourette’s syndrome at age 12. This is a heavy burden and the changes that this syndrome brings on can be life altering.

For much of his life, Sacchet had a normal upbringing. He went to school, had friends and fell in love – all relatable events. However, when he was diagnosed with MS in his early 20s, it was another series of changes that he had to adjust to, not only physically, but mentally. With two concurrent issues to address, it became hard for him to manage all of his symptoms with prescription medication and general treatment.

So he turned to dealers and the like and soon became a coke addict while on and off the job. Apparently all those years of Nancy Reagan and her “Just Say No” campaign had little effect on Sacchet and his friends. They probably rolled up those flyers to do lines of coke after work. As the book continues, Sacchet tells stories about dealers, scores and close calls. He looks back and is thankful that he is alive. This book will make anyone who isn’t on drugs think twice about experimenting with them.

I have never done drugs and reading this book makes me glad that I never did. Doing drugs gets you nowhere and Sacchet isn’t afraid to say that. I like that he is forthcoming and blunt because that may be the only way to get people’s attention. There are real life stories of redemption, recovery, love and support in this story. But success was a hard won battle that Sacchet had to fight for everyday. If he didn’t fight, he wouldn’t be here to tell his story and it is one that needs to be told.